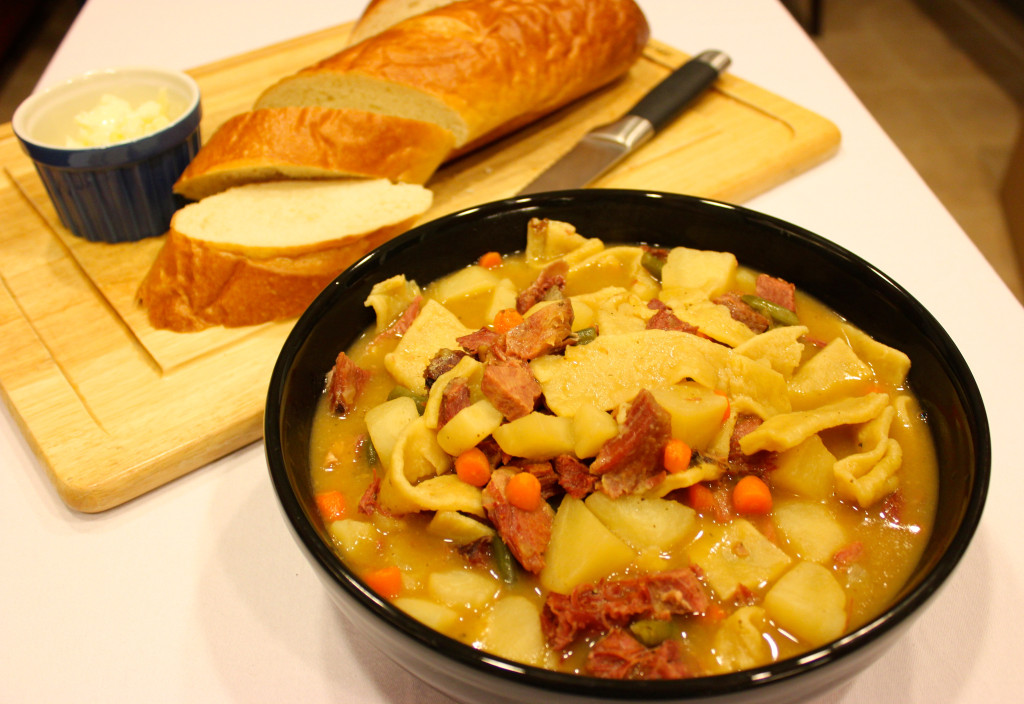 Growing up in Central PA with a Pennsylvania Dutch Grand-mother whose family name was Yingling, and a Mother who made lots of inventions with second day dinners, we have a dish using leftover ham and homemade noodles my Mom always referred to as “Popeye.” From what I gather, the original PA Dutch name is “botboi” or pot pie. How it came to be re-named “popeye” in my family is a mystery, and quite honestly, once I bite into a big soup spoon full, I call it “heaven”! Learning how to make the homemade noodles is a rite of passage in Mom’s kitchen and you don’t dare use store bought pasta noodles. As far back as I can remember, Mom had kids in the kitchen with a bit of dough of their own to play with while she’d roll out the noodles and toss them, a few at a time, into bubbling hot ham broth with big chunks of ham and potatoes. By the time the kids were finished playing with the dough, Mom’s kitchen looked like an explosion in a flour mill!

This dish is considered ordinary fare in PA Dutch country, and it’s generally made from scraps of meat leftover from Sunday dinner.  Most people think of pot pie as a filling baked in a pastry shell, but with thick starchy noodles in the hot broth, this dish becomes more of a stew. This is the kind of dish that simmers on it’s own for a couple hours, and the noodles are quick to make so very little effort is needed to toss everything in a pot and get on to other chores.

My Mom throws pieces of leftover roasted ham butt from Sunday’s dinner along with the meaty bone for extra flavor. **I like to make a ham gravy  from the drippings first, to serve with mashed potatoes, then the next day, I add the leftover gravy to the water to make a richer broth.

The noodles are a quick dough flavored with butter or lard, a couple eggs, and some cold ham broth, just to moisten the dough a bit.  There is no need to let the dough rest, because there isn’t time when Mondays are so busy and it’s not meant to be stretchy like pasta. It’s more of a dumpling. They are quickly rolled out and Mom always cuts hers with a pizza cutter, going up and down the dough. The noodles are often cut into squares, but we cut them into 4 inch noodles. My noodles are never perfectly even, but my Mom has mad skills because she can go up and down the table so fast without the need to measure, and they always seem so perfectly even.

To make this recipe, first refer to my Wild Boar Ham recipe. If there is no wild pig in your area, a domestic ham can be used.

How to prepare it:

Place the cubed ham pieces, ham bone, leftover ham gravy, carrots, onion, celery, spices and water into a large stock pot and bring to a boil, then turn down to low simmer for 2.5 hours.

Remove the ham bone and any scrap pieces of ham from it and place the pieces back in the broth, and discard the bone.  Peel and Cube potatoes and add to the broth, along with cut green beans and turn up the broth to a medium simmer.

Make the botboi deeg while the potatoes and beans are cooking.

Add flour to a hard surface, table or counter top, and add the butter.

With a pastry cutter, cut in the butter until the flour resembles crumbs. 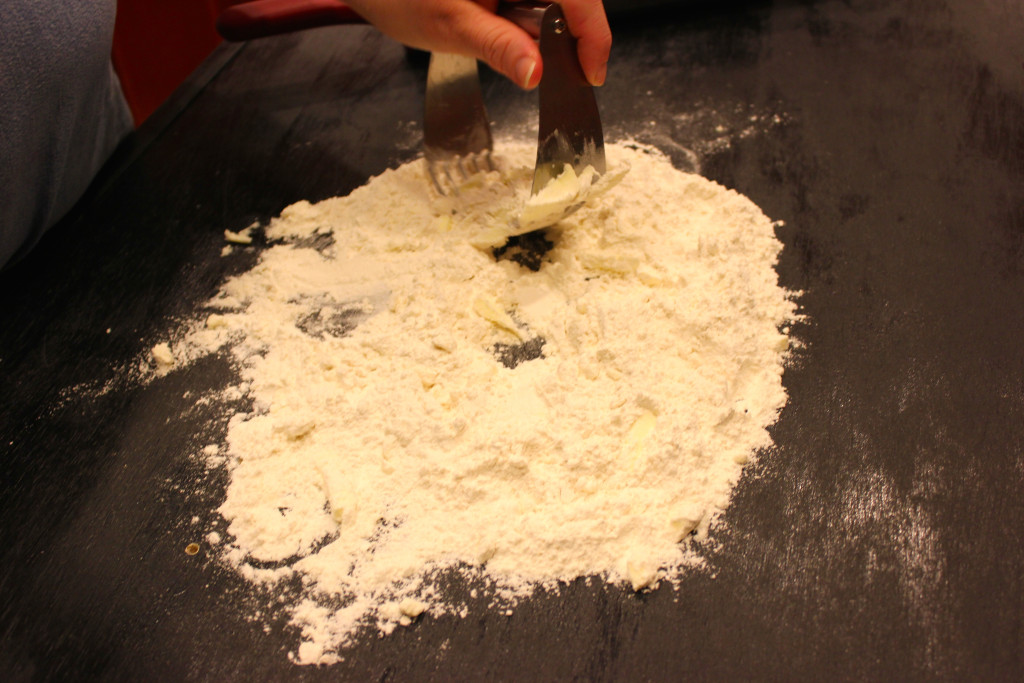 Then add the eggs and incorporate them into the flour using a fork. 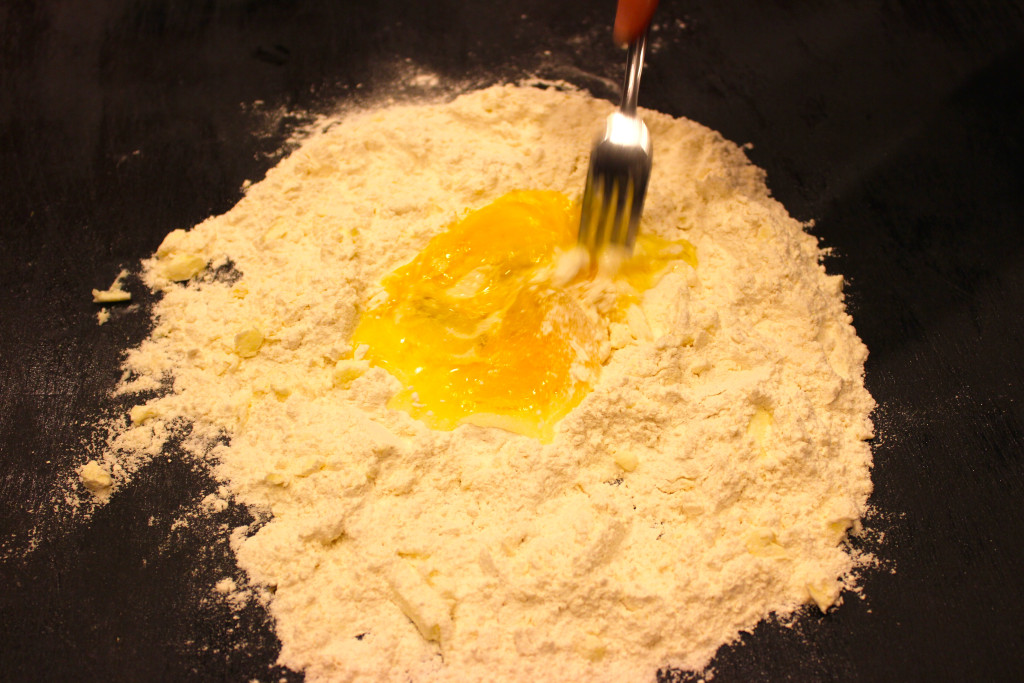 Then pour the cooled ham broth over the dough just to moisten it slightly. 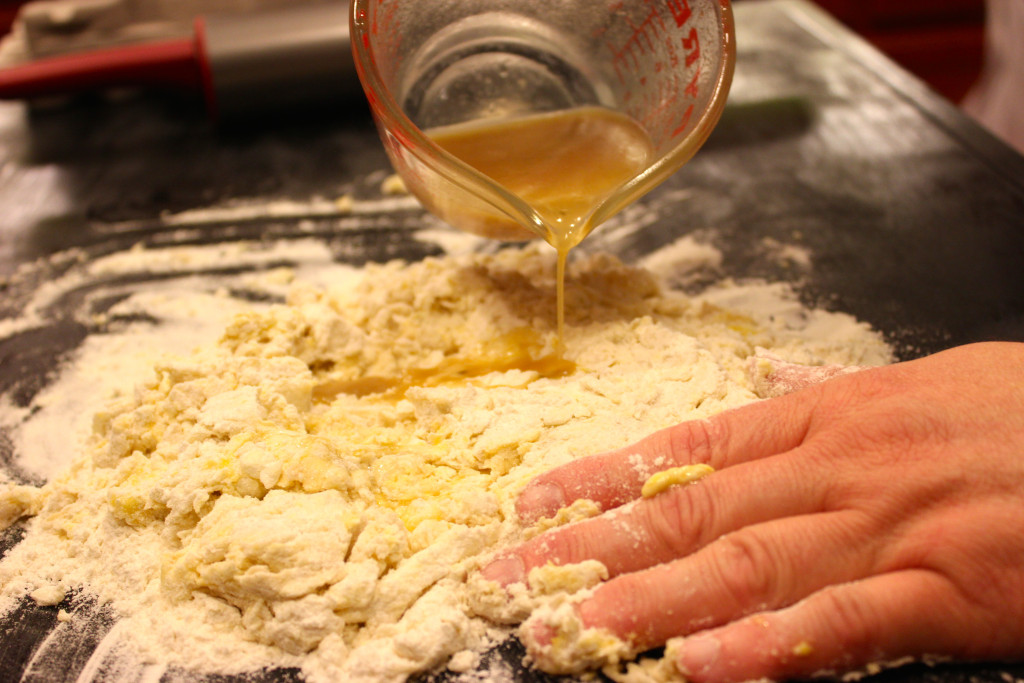 Bring the dough just to a ball and cut it in half.

Sprinkle a bit more flour under the dough, and roll the dough out into 1/4 inch thick.

Using a pizza cutter or knife, cut 1 inch wide and 4 inch long strips or 2 inch squares in the dough. 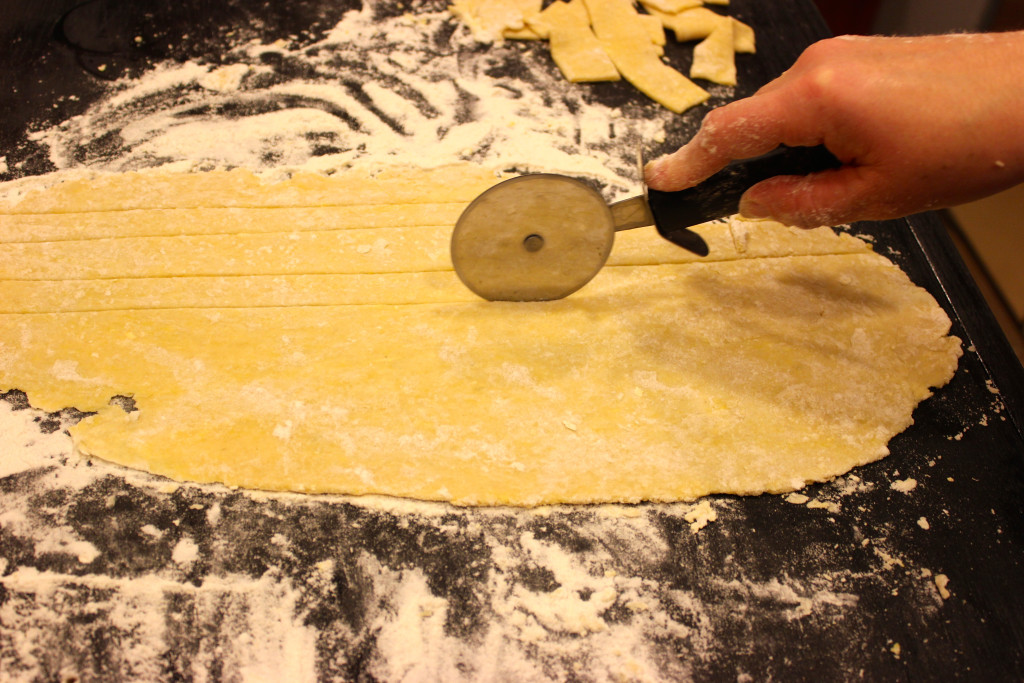 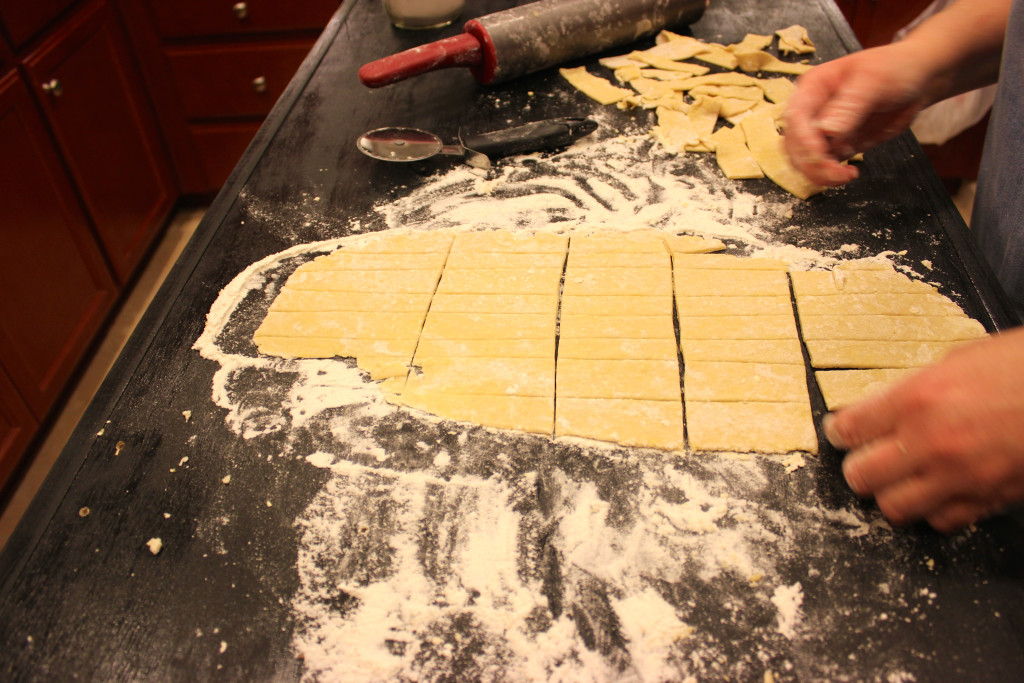 Set aside the first batch of noodles and keep them loosely separated so they don’t stick together.  Then roll out and cut the other half of the dough. 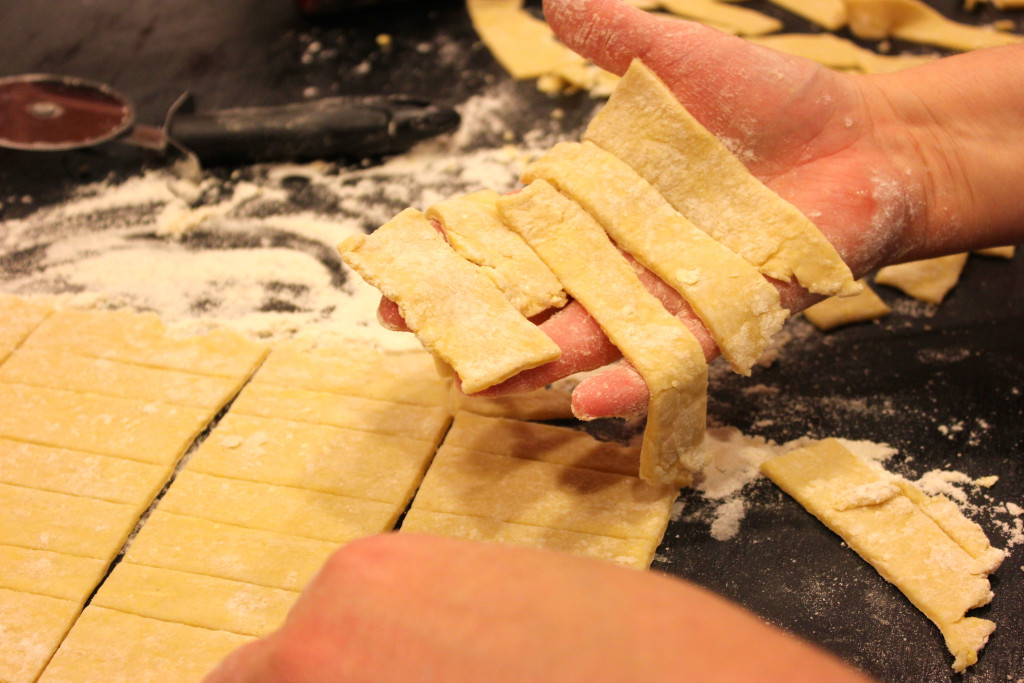 Turn up the heat to bring the broth to a full boil, and add the noodles, a few at a time, and stir so they don’t stick together. 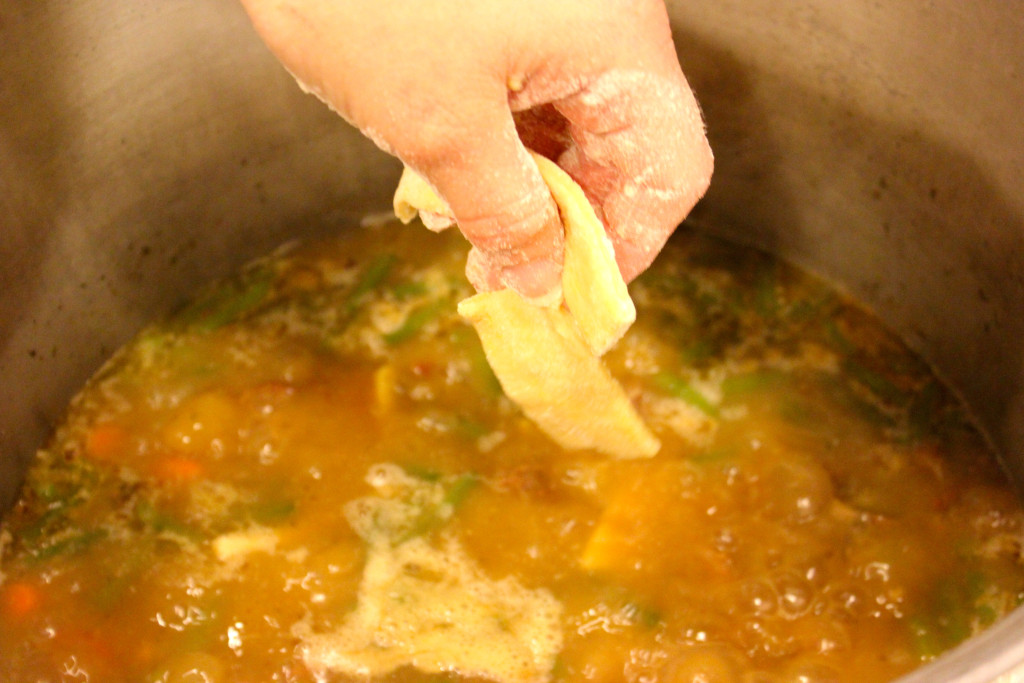 Keep stirring and adding noodles as you go until all the noodles are added to the pot and cook for about 4 minutes.

Serve the “Popeye” with bread and butter!

Here at the He Hunts She Cooks kitchen, we like to utilize as much of the animal as possible. Some … END_OF_DOCUMENT_TOKEN_TO_BE_REPLACED

Reminiscent of the Chinese dish orange beef, this Meat On A Stick Monday is sweet, spicy, and has a … END_OF_DOCUMENT_TOKEN_TO_BE_REPLACED