Breaking it Down: The Venison Hind Quarter –

When Bobbie Jo makes a venison recipe and mentions cuts like “Eye of Round” or “Top Sirloin” where do these cuts come from on a deer? These and many other cuts are from its hind leg, also called the hind quarter.  In this post I’ll show where the major cuts of meat come from on the deer but focus on the hind quarter since it can be somewhat intimidating to the first time home butcher.

Overall, when butchering a deer, most of it’s fairly easy to break down to the major cuts. For instance the back-strap, also known as the loin, can be taken off each side of the deer’s spine in one long piece of meat as shown here. Since the backstrap is the second most tender part of venison, it can be cut into medallions for a quick sear and served medium rare. The tender-most cut is the tenderloin which is against the backbone but on the inside of the cavity and is usually removed first.

The neck meat can be trimmed off the bone in a similar way.  But since the neck tends to be a tougher cut, it should be used for low and slow cooking, ground for meatballs and sauces, or soups/stews, and charcuterie. 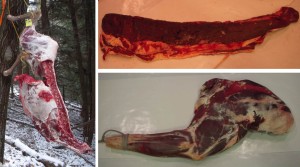 The front quarters are easily cut away from the rest of the carcass whole. There’s only muscle and connective tissue holding the front shoulder to the body, with no ball-and-socket joint to worry about so a knife easily separates it from the rib cage area. 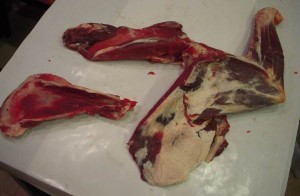 For the front quarter, all of the meat is trimmed away from the leg bones and the shoulder blade. This entire piece of meat works well for cutting up into small pieces for canning, which we prefer. It can also be cut up for stew meat and needs to be cooked at a low temperature for a long period of time.  If you really want a large quantity of ground venison, the front shoulders are very good for this as well.

< By the way, if you notice in the pictures the venison meat appears to be dry on the outside, it’s because it has been aged for about 10 days. The dryness on the outside is natural and to be expected, and even desired. Aging meat, ideally at a temperature of 38 deg F for this period of time allows the meat to begin the breakdown process which adds to its tenderness. The dried portion can be trimmed off prior to wrapping and freezing or when it’s defrosted and being prepared for cooking. >

Now comes the part that’s a bit more complicated; the hind quarter. First of all, each hind leg can be removed from the rest of the carcass by cutting away the meat from the hip bone and spine on each side and working your way down to the ball & socket joint. Once the connective tissues are cut that hold the ball to the socket, the quarter is free to remove.

As you can see, there’s a lot of meat available but the trick is to separate the cuts into the more tender and less tender ones. 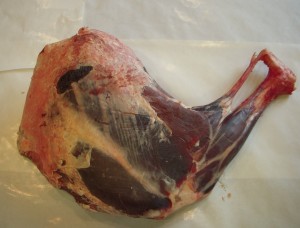 Unfortunately, many well intended butcher shops will simply freeze the entire hind quarter and use a band saw to slice through the meat and bone and create a leg or bone-in “venison steak”. Unfortunately, this slice of meat, with the bone in the middle has at least three different muscle groups included in a single slice, so it’s impossible to cook this type of steak correctly. 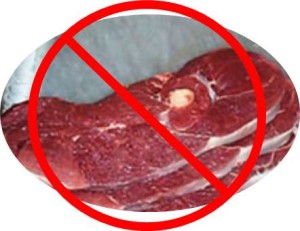 Instead, we like to break down the hind quarter into the meat cuts based upon the natural separation of the muscle groups. This will ensure the more tender cuts can be seared and dry roasted, and the less than tender ones can be cooked low-and-slow.

Here’s a picture with the sections of the hind quarter separated but in somewhat relation to where they are when still connected. I’ll describe each in more detail. 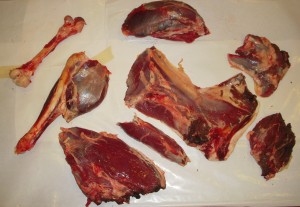 To begin, place the hind quarter on a flat work surface with the ball joint face up. 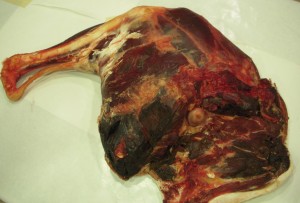 Then look for a seam that leads almost directly along the same line of the femur bone and using a sharp boning knife cut along this seam. It should cut easily and almost separate the muscles on its own with pressure from your fingers and with a few cuts of the connective tissue with the knife. As you get closer to the bone use the knife to cut the meat away from all around the bone and continue toward the knee cap. After cutting out the knee cap you can cut away the femur from the shank (lower leg bone) or continue down the shank and remove both bones together. When I butchered this deer I left the shank bone connected to the upper and lower shank meat so that we could make a braised venison shank. 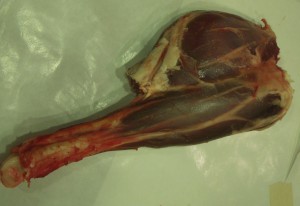 For the rest of the hind quarter, it’s a matter of separating the major meat sections that remain.  These can be found by separating them at their natural seams to create the following cuts: 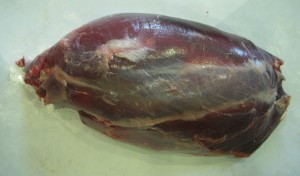 The round, football shaped section of meat is called the Top Round or Top Sirloin. This is a rather tender piece of meat, especially if the hind quarter has been aged. The Top Round is great for dry roasting; sear and finish in the oven on high heat for a short time. Alternatively, the Top Round can be sliced into 3 or 4 strips of meat, following the internal seams, that can be marinated then seared and finished on the grill and served medium rare. 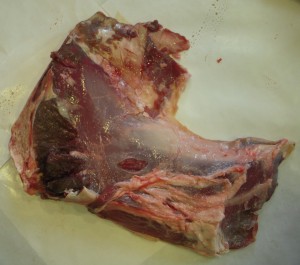 The thick but flat, dense section of meat on the bottom of the hind quarter is called the Bottom Round. It’s very lean after cleaning up the fat and sinew on the outside. It’s best for braising; cooking at a low temperature in liquid for a long period of time. It can also be used for canning to break down the toughness of this cut of venison.

Attached, but easily separated from the Bottom Round is a tubular, elongated section of meat that somewhat resembles the shape of the tenderloin and is called the Eye of Round. If aged properly, this small piece of venison can be prepared just like the tenderloin; seasoned and grilled or dry roasted, and served medium rare. 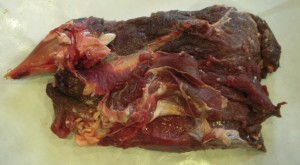 The small, square section of meat to the back of the hind quarter is called the Top Butt. This cut, when aged properly is medium tender, and can be either dry roasted or braised. It’s a good cut for Swiss Steak or in a Stroganoff.

The large, oval section on the hind quarter is called the Bottom Butt. This is the largest cut of meat and is fairly tough but still tasty. It’s best to braise this meat, cooking it low-and-slow to breakdown the meat and the connective tissues and fat within it. 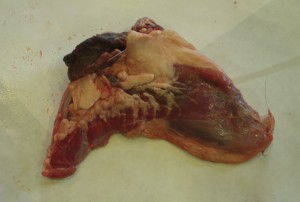 The remaining, fairly small piece of venison on the hind quarter that’s shaped like a triangle is called the Tenderloin Triangle. The meat in here is very tender as this is the section that leads to the tenderloin. Although there isn’t much meat here, this piece can be cleaned of the fat and connective tissue and grilled for small meal or as part of a venison two-ways dish, being paired with a separate braised meat, or as the turf part of a surf-n-turf meal, or simply included when grilling tenderloins.

The picture below can be a good reference chart for the venison hind quarter.

Now when Bobbie Jo mentions these particular cuts of venison from the hind quarter in her recipes, you’ll have a better idea of where they’re located on the deer.

Stay tuned here at He Hunts She Cooks for a butchering video where I’ll show in more detail how to breakdown these sections of the hind quarter.

Here at the He Hunts She Cooks kitchen, we like to utilize as much of the animal as possible. Some … END_OF_DOCUMENT_TOKEN_TO_BE_REPLACED

Reminiscent of the Chinese dish orange beef, this Meat On A Stick Monday is sweet, spicy, and has a … END_OF_DOCUMENT_TOKEN_TO_BE_REPLACED